So, I think I’m the last to post about the Type-In, all the boys were really efficient in typing theirs up!
If you haven’t read the other’s posts about the Type-In/Out and seen the pictures, here it is:

Scott and I made it to the park under the Story Bridge just before 11am in a car was chock full of tables, chairs and of course, typewriters.  Scott was explaining to me on the way to the park that parking in that area was somewhat a nightmare and he was quite surprised that we got a spot almost immediately on one side of the bridge. Scott hopped out to find the other S.K while I snagged us a table next to no doubt ironically, a Singaporean family just enjoying a Sunday morning. So Mr. Steve K had already reserved a spot for us on the other side of the bridge where we had parked, so Scott drove the car over to unload the things in the back of the car while I stood in the middle of the parking lot with my typewriter.
Some eager cars went by and I’m sure some of them cursed at me and my Adler.

After the swap-a-roo was done and the dust settled and hand shakes, the Type-In was a roll!

We had three tables worth of typewriters. 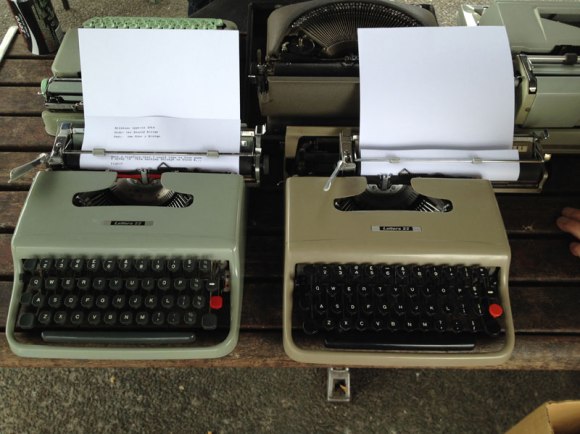 Two of the three Olivetti Lettera 22’s that showed up.

John’s incredibly handsome push-rod Klein-Adler. Sadly the knob fell off so I didn’t get a change to get a type sample. Russian keyboard was interesting. 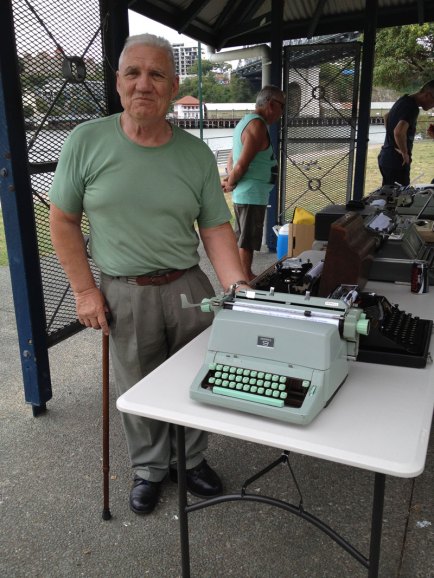 John, standing proud next to his Hermes 9.

Rino lookin’ ever so cool in his fedora and Steve Snow trying out my Adler Favorit 2.

Scott K. on da’ phone while John and Robert’s friend Gary have a chat. 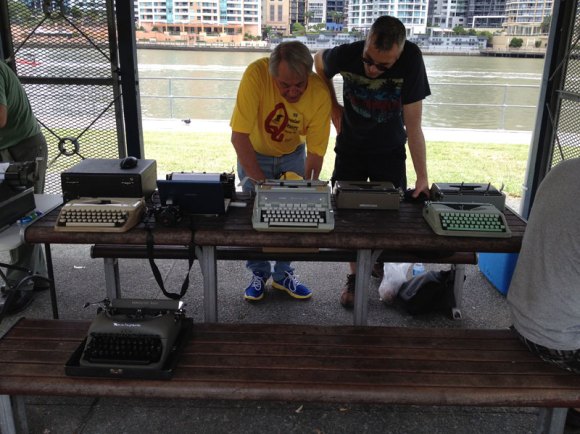 Robert  explaining something to Steve K.

This hulk of a machine printed one of the smallest typefaces in the Type In!

Steve Snow’s beaaaautiful Underwood Noiseless 77. Lucky I wasn’t left alone with this machine. I would have nicked it.

Robert was very kind to give us copies of his book “101 Great Typewriters” — we queued up for an autograph. :3 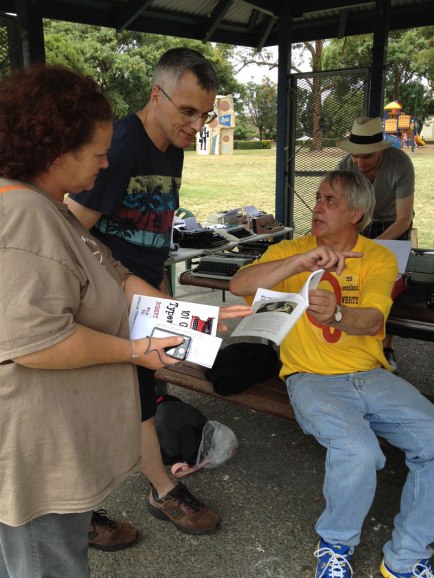 Louise and Steve K getting their books signed by Robert 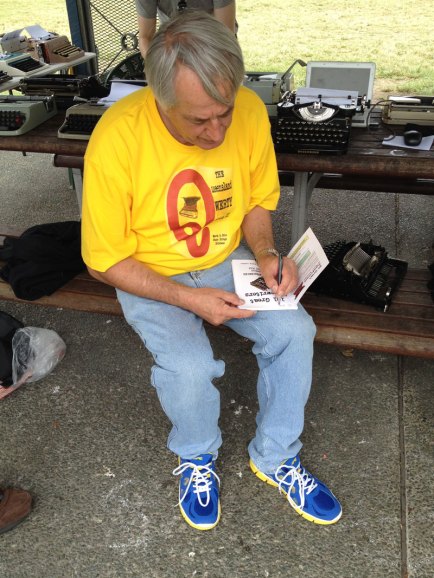 Robert’ in his bright QQQ yellow shirt and matching runners.

There were some gorgeous machines, and machines that I would have never had a chance to lay hands on. My collection consists of ultra and semi portables, so smashing it out on a standard was something else altogether.

You’ve probably seen it in the pictures the others took — I’ve got a rather *gulp* determined look on my face. I was going to get a type sample of all the typewriters and possibly file them away somewhere, just to appease my sentimental side. Here’s the scans of the type samples. I hope I got them all! 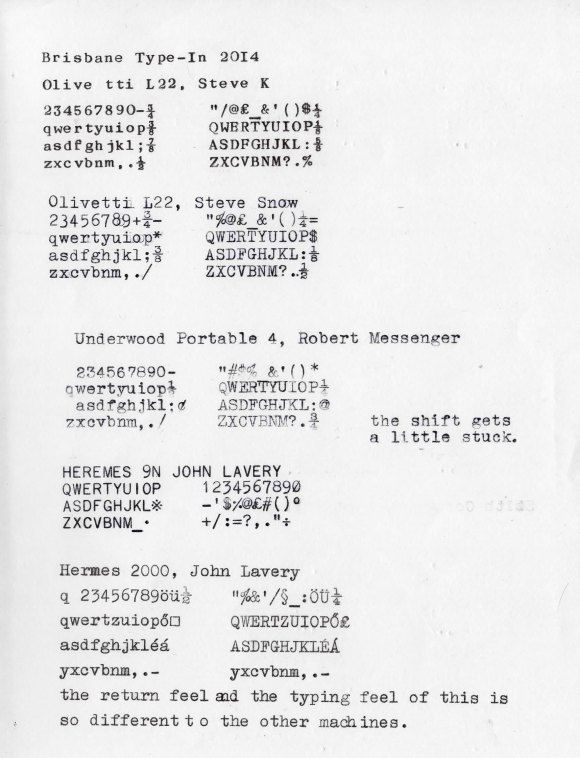 This picture makes me smile :)

Robert took out an AMAZING upstroke Fox Standard. It was just beautiful. *sigh* :) My phone does no justice to the beauty of this machine.

I had brought a couple of the Typewriter Mystery Games books — it’s basically step by step instructions to ACSII art. You don’t what you get till you finish it. Rino had typed a sparrow and I did two crows for Steve Snow in exchange for this witty story:

Someone left this on the Adler Favorit 2.

There was a typing contest, fish and chips, stories and more stories till 5pm. Time went too quickly, but it was well spent.

Thanks for the awesome time guys, till the next Type In! :D